After not finding any reviews on the “Add-a-bike” dirt bike hitch carrier, I decided I’d write one. I’ve never written a review on anything, but here we go...
Before I get into it, I just want to alert my fellow Canadians to the UPS issue that many of us have run into. The problem is when you receive something that was shipped from the USA via UPS Standard. UPS standard does not include customs brokerage fees. In this case, I ended up paying about $60 extra. Past experience had me ready for it, but it still hurts when the guy in the brown uniform is standing at your door with his hand out. If possible, it’s often cheaper (and faster) to use UPS Express or UPS Expedited. The USPS is also an option. They only charge $5, if anything at all. None of these options were viable in this case. The weight of the item made UPS Standard the cheapest option, even with the fees. Now, on to the review... 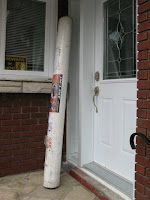 The Add-a-bike arrived in a shipping tube. It was well packed and survived the journey...


A word of warning on assembly... If you’re not technically inclined, get some help from someone who is. Although it’s fairly easy to figure out, the instructions provided on the website are not very detailed. You will need to figure out which bolts get used where, and where to put washers etc.

The 1st item I feel I should critique is the workmanship itself. Although the pieces do go together, the cuts are rough and not very straight in some areas. 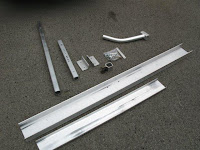 The tolerances for some of the drilled holes are quite loose, while others seem very precise. It’s almost as if different people drilled them. I ended up getting out a square to help assemble the carrier. Had the tolerances been tighter, this would not be necessary.
It took about an hour to put together while taking notes and pictures. There may have been a beer brake in there somewhere as well. . 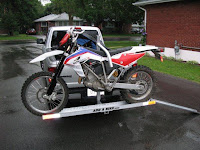 Here it is with the bike on it. It’s BMW G450X, weighing in at about 260 lbs. It really does go on as easily as the youtube videos make it look. I’m also pleased to report that I didn’t feel like I needed to add straps. Although some may feel differently, the bike does seem very secure without any additional straps. It’s also very light, so it’s easy to slide into the receiver and it doesn’t add unnecessary weight.
On a side note, before I get any comments like “why don’t you just put it in the back of the truck,” suffice it to say, I have my reasons. ‘Nuff said. 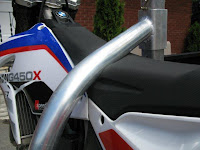 After using it for about a week, the bike has spent a total of about 6 hours riding on the carrier. I have two concerns and one peeve. The 1st is the sharp angle of the bar that holds the bike down. Time will tell if it will do any lasting damage to the seat. It does put allot of pressure in one small point

My second concern is where the frame of the bike rubs against the upright post. With very little time so far, there is a significant indentation to the post. I’ve taken to wrapping it in duct tape. I’m trying to come up with a better solution though. 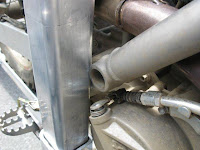 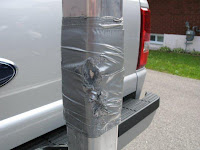 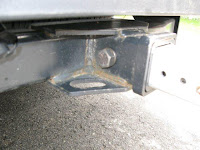 The peeve is the “anti-wobble” bolt. You can’t lock the carrier onto the hitch while using it. There are better anti-wobble solutions out there which do allow for a lock. It’s too bad one wasn’t used.
So there you have it. Those are my thoughts. You probably want to know if I “like” it or not. I think it’s a good version of a hitch carrier. It has pros and cons. Hopefully you have a bit more information for your decision. 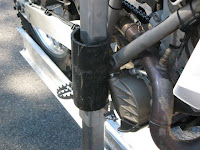 I've since come up with a better solution for the issue of the frame rubbing against the upright post. I cut an 8” length of 3.5” PVC pipe and slid it over the post. It just sits on top of the peg holder and moves with the bike. It may not be elegant, but it works better than the handyman’s secret weapon. 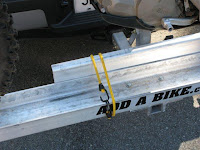 I’ve also noticed another minor shortcoming, and this really is minor. When the ramp is being carried, it only gets attached at one end. This causes it to bounce around at its free end while you’re driving along those rutted out gravel roads that lead to all the best riding spots. I’ve temporarily used a bungee cord to solve the problem, but it would be worth adding a clip to hold the other end while in transit. 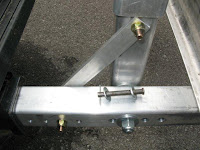 The “fine adjustment bar” was held in place with pins, rather than bolts. This was actually nice for the initial fitting of the bike to the carrier, but it did make things a little wobbly. I also figure that I’d eventually lose them. I’ve since swapped the pins out for some grade 8 bolts. This made things much more ridged.
Posted by Lord at 10:16 AM No comments: